Home » Tattoo Aftercare » How Does Second Skin Work On Tattoos?

How Do Second Skins Work On A Tattoo?

You’ve just finished getting the perfect tattoo. Now you’re wondering how you can protect your new artwork and help it heal as quickly as possible. If this is the case, consider something called a second skin.

What Is a Second Skin?

It’s basically what the name suggests! It’s a bandage that acts as another layer of skin to protect the wound that’s underneath it. This wound is a new tattoo. The idea was initially used to heal severe burns but later became famous for their use in protecting tattoos.

How a Second Skin Works

A second skin shields your tattoo from the outside world. While this extra layer is present, your body begins to heal the wound that lies underneath. It quickly forms its protective layer of skin over the top of your tattoo. This means, when you peel off the artificial second skin, your tattoo is protected by a naturally formed layer.

A second skin also acts as a barrier to germs and bacteria, protecting your tattoo at its most vulnerable stage. They allow oxygen to reach your tattoo while at the same time remove surplus moisture vapor, which can slow down the healing process.

How to Use a Second Skin

Second skins are easy to use, which is one of the reasons why they’ve become so popular.

It’s totally normal to see some ink or blood under the bandage. This will usually appear within the first day. If you want to, you can replace the old dressing with a new one, following the application instructions.

You can leave a second skin on for as long as it feels comfortable to you. Most people remove it after three to four days. The same bandage shouldn’t be worn for longer than seven days, though — remove it to clean your tattoo. Second skins are great, but they aren’t miracle workers. In areas that bend or flex, they don’t last as long as areas that stay still.

Advantages of a Second Skin

There are several benefits of using a second skin on a new tattoo:

We love that second skins are deemed waterproof since it gives you that extra layer of confidence your skin is protected from water, which can delay healing.

You can shower with it in place, but you should avoid soaking the area in the tub or swimming for at least two weeks after getting a new tattoo. Be gentle because much water can diminish the second skin’s adhesiveness, making it less effective.

This is important as second skin allows oxygen to reach the tattoo even when it’s under the bandage. Oxygen is vital for the healing process.

New tattoos are incredibly susceptible to infection. A second skin will act as a shield from germs and bacteria, reducing the likelihood of infection.

A second skin will also protect your tattoo from dirty work environments and from clothing rubbing against the area. An added benefit is that your clothes are also protected if your tattoo bleeds or leaks ink in the first few days. This protection allows your skin to heal quicker than if it was exposed to the elements.

Unlike cling film — a popular method for protecting a new tattoo — a second skin doesn’t move, even under your clothes. Cling film slips easily out of place, which can irritate your wound.

Control Over the Size

You can cut the second skin to the size and shape that you need to cover the tattoo. This means it doesn’t matter how big or awkward in shape your tattoo is. You’ll always be able to cover it adequately.

With a second skin, you apply the bandage and leave the tattoo to heal itself. You’ll have peace of mind knowing your tattoo is protected and can recover effectively.

Disadvantages of a Second Skin

Despite the clear advantages, that isn’t to say they’re suitable for everyone. Here are some reasons why not:

Although most second skins claim to be hypoallergenic, it’s still possible to rarely have an allergic reaction to them. If you have sensitive skin, you should take extra care. A good idea is to test a small area of skin before you use it on a tattoo.

Using cling film — while it has its drawbacks — is much cheaper than a second skin. You have to weigh the costs against the advantages of getting a second skin. Is it worth the investment to you?

If you don’t apply it as recommended, or if the skin bends a lot in that area, a second skin can leak. It’s best to check it regularly to prevent any accidents. Even so, if you’re avoiding water anyway, this may not be a big deal.

Doesn’t Carry out the Healing

Even when you apply a second skin, you can’t just forget about it. You should still monitor the tattooed area to make sure it’s making good progress.

When you remove it, your tattoo will still need aftercare. Be sure to wash it regularly and apply moisturizer. While the second skin will not heal your tattoo, your body will typically heal faster with this type of dressing.

REMEMBER – Tattoo aftercare is extremely important, and good quality healing is vital for ensuring a vibrant outcome for your new tattoo. 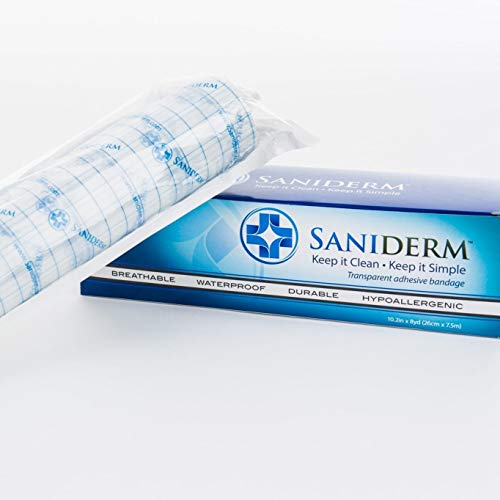 The market leader when it comes to second skin at the moment is Saniderm. Their aftercare bandages have received raving reviews and are generally much-liked.

Saniderm’s second skin bandages are water-resistant, breathable, vegan-friendly and latex-free, all while helping to nurture the tattoo through the aftercare process easily and effectively.

A Second Skin for Your Tattoo

A second skin is an artificial layer that’s placed over a new tattoo. They’re a great invention to help protect a tattoo at the beginning of the healing process. A second skin also relieves the stress of looking after a tattoo in the first few days after getting it done. Remember, they don’t do all the work. It’s still up to you to follow the aftercare instructions to help heal your tattoo.